Welcome to Tuesday on the Warrior Princess Blog!  Today I'm interviewing Deb Houdek Rule.
Deb Houdek Rule is a native of Minnesota, growing up on a farm near Pine City, MN. A graduate of the University of Southern California in Cinema-Television Production, she has worked in broadcast engineering since 1983. She has also worked extensively in television and video, writing, producing, and editing numerous video productions. Under the name D. A. Houdek she has published numerous science fiction and fantasy short stories As D. H. Rule she researched and published a groundbreaking piece of non-fiction Civil War research, “Sultana: A Case for Sabotage,” focusing on Confederate secret service operations in the Trans-Mississippi. Deb met her husband, Geo Rule, online on the Heinlein Forum. 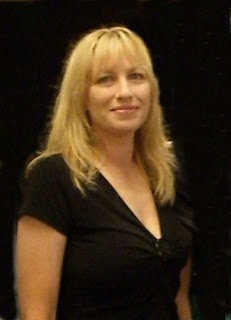 I write across several genres. My first love, and one I use in Of All the Western Stars, is science fiction. Most of my published short stories are science fiction. But I also have a long-time love of history. I’ve been published with my non-fiction research on the U.S. Civil War, and appeared in a History Channel documentary because if it. I fell in love with the Tudor era of England when I was eleven-years-old and saw the movie Anne of the Thousand Days. My novel is set in that era.

Though I have a strong fondness for reading the romance genre, and have devoured novel after novel of romance, especially the historical, I have a hard time expressing my own romantic side. This novel came about because I was in the midst of the first real romance of my own with the man who is now my husband. We met online, on an Internet science fiction forum in the early days before things like online dating existed, and had a long-distance romance from 2000 miles apart. While this frustrated, distant, but powerful romance of our own was taking place, I took my first trip to England, visiting the very locations I use in the novel. All these things twined for me from these experiences of my own—love with a distant, unreachable man in a strangely science fiction way combined with the locations and people of Tudor England. In many ways, Of All the Western Stars is a bit autobiographical!

I started writing in the sixth grade, writing my first “novel” then. It wasn’t much of a novel, but it was a start that would never stop. I’ve always written, whether in fiction, or in whatever other ways that presented themselves. I’ve done technical writing, script writing for technical instructional videos, industrials, and business promotional writing. My first and always writing love and devotion is fiction, however, because that’s where I can set my imagination free and travel to new places.

I have been a farmer, a waitress, briefly a factory worker (to pay off a car when I was nineteen), but primarily I work in broadcast television. I graduated the University of Southern California with a degree in Cinema-Television Production. I’ve worked in television for nearly thirty years, doing pretty much every job there is to do in the field, from writing, producing, editing, running a camera, technical directing, and broadcast engineering. It’s been fun, but the field is changing and now I’m looking to get out and move on to more concentrated work in writing and web design.

Do you write under more than one name? Why?

I started writing science fiction as D. A. Houdek. That’s my maiden name, “Houdek,” with my initials. This is because writing as a woman in that genre could be a hindrance. When I published my first non-fiction history I used D. H. Rule, my married name, “Rule,” with my initials used for the same reason. I research and write a very hard-core area of Civil War research and didn’t want my gender to impact perceptions of my research. I’ve worked in male-dominated fields all my life, from when I was working on my parent’s farm to working in an area of television broadcasting as one of the first women in television engineering, and not always welcomed, so I’m not unaware of perceptions of gender and how they have an impact. Now, however, the world had, indeed, changed and I’m putting all my writing under my full name, Deb Houdek Rule. My science fiction stories, and non-fiction history will all be republished as by Deb Houdek Rule. It’s a pleasing change to make.

In Of All the Western Stars I chose some people who are a bit to the left of the major players of the time.  One of the families I use is historically real, the Stafford family. The first son was the Duke of Buckingham, who was later executed for treason by Henry VIII. The people I use are the second son of the family, Henry Stafford and his wife, Cicely, who was older than he was. Their son, however, is fictitious. 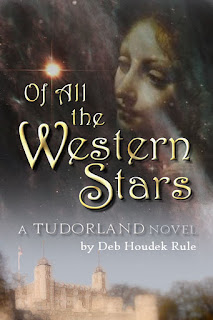 I know how to start a 1930’s John Deere B tractor, and how to run one. I have been to all fifty states in the United States. I love fast cars and have driven 115mph in a rented car on the Autobahn, and could have gone faster except I couldn’t think of how to say “I’ve blown the car’s engine” in German. I love snowshoeing. I do home renovation, more or less successfully. The wood floor in the dining room went very well, but I never want to do tiling again! I speak a bit of Icelandic.

Science fiction writer Robert A. Heinlein has had the greatest impact on me, in more ways than I can really count. I found his books when I was quite young and was transported by his vivid stories of adventures in which we all can share, whether male or female. As I mentioned, I’ve been in male-dominated fields of work most of my life and I credit both my parents, who never tried to apply “girls shouldn’t do that” restrictions to me, and to Robert A. Heinlein, whose juvenile science fiction novel are shining examples of books that promote not the equality of girls to boys, but the superiority of girls and women in most areas! I’ve written articles on this subject. His main characters were boys, writing to the publishing market of the 1950s, but he always had female characters who were smarter, more skilled, braver, and just as adventuresome as the boys. Those lessons never left me. In Of All the Western Stars, the main character, Lisette is fighting her own battle against the roles and restrictions the world is trying to impose upon her, and is seeking that broader adventure and knowledge that I, myself, once sought.

Beyond his writing, Heinlein also directly influences my life every day. I’m on the Board of Directors of the Heinlein Society, a charitable organization dedicated to the concept Heinlein originated of “Pay It Forward.” We operate blood drives and have educational programs. I also am webmaster for all the Heinlein Prize Trust websites, that being the Heinlein literary estate, not only designing and maintaining their websites but writing articles and press releases on a regular basis. And, most importantly, it was the Heinlein Forum where I met my now-husband, Geo Rule.

I’m also a fan of Laura Ingalls Wilder and have a long-running and popular website devoted to her and her stories. I also fond of Loula Grace Erdman, who wrote pioneer west historical romances.

I’m from Minnesota. I lived out west for a number of years, but Minnesota is always my home and where I come back to.

I am a complete multi-tasker. I always have many projects going at once.

Stars That Sing the Requiem: Five of my science fiction short stories, several of which have been published in various magazines and ‘Best Of’ collections. They include the title story, “Stars That Sing the Requiem,” “Silence At the Fall of Night,” “Terra Formation,” “Those We Left Behind,” and “Flowers on the Moon.” All feature women in the main roles. This will be available on Kindle by February 2012.

Call of the Stars: This is a novella and two accompanying short stories about a young man breaking away and reaching for his own future.

Sultana: A Case For Sabotage: This is the groundbreaking article I wrote on a case of Confederate Secret Service operations in the Trans-Mississippi theater of the U.S. Civil War. My research was the first in-depth study of this area and the spies and saboteurs knows as the “Boat Burners.” I will be republishing the article that appeared in North & South magazine,  which led to my appearance on the History Channel in “Civil War Terror.”

I have a number of other books and stories in progress. Following up on Of All the Western Stars, I have two sequel novels plotted.

Thank you so much for joining us today.  Visit the following links for more information on Deb Houdek Rule: