I am very pleased to have with me today author Martin Lastrapes.  Martin grew up in the Inland Empire. He studied at Cal State San Bernardino, where he earned a Bachelor’s Degree in English and a Master’s Degree in Composition. Inside the Outside is his first novel.

Martin will be here again on Thursday January, 26, 2012 and will also be our Friday Freebies guest on the 27th. 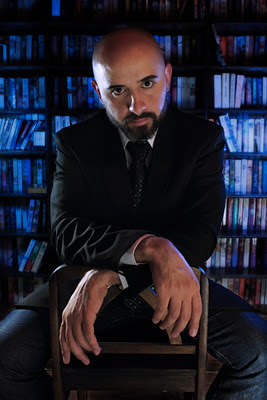 I suppose if there is any one message I’d like for readers to take away from my novel, it would be that the world is much bigger than we often realize and it could do all of us a little good to go inside the outside from time to time.

How long have you been a writer?
I wish I could tell you I’ve been writing since I was old enough to hold a pencil, but the truth is I didn’t start writing with earnest until I was about 19.  So I’ve been a writer for about 15 years—of course, for most of those years, I wasn’t very good at it.
What’s something fans would find fascinating about you
Fans might be fascinated to find out that many of my storytelling techniques come from my love of professional wrestling. If that doesn’t do it for them, perhaps they’ll find it fascinating to hear I didn’t watch The Wizard of Oz until I was 28. If neither of those work, tell them I’ll be running for president in 2012 (it’s not true, but I’m feeling sort of desperate).

What books or authors have most influenced your life?
The Jungle by Upton Sinclair, Still Life With Woodpecker by Tom Robbins, The Los Angeles Diaries by James Brown, and The Things They Carried by Tim O’Brien have all had profound affects on my life for varied reasons.

Do you work on one project at a time? Or do you multi-task?
One at a time for me.  Although the novel I’m currently working on is a bit complex, so it feels like I’m multi-tasking.

Please share with us your future projects and upcoming releases.
I’m currently working on my second novel.  It’s a vampire story.  There’s blood, horror, romance, and laughs.  My goal, among other things, is to write a vampire novel for folks who don’t like vampire novels.

Please enjoy an excerpt from INSIDE THE OUTSIDE. 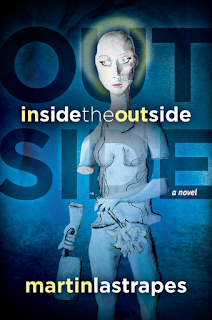 During the course of her life, at various points, both in her youth and as an adult, Timber Marlow was, what you might call, a murderer.  But she wasn’t a murderer so far as I’m concerned.  For certain, she killed—and, so that there is no confusion, she was a killer of men.  The word “murder,” however, has sinister connotations and Timber Marlow was not sinister.  Nor was she cold, callous or without conscience.  And she was by no means a sociopath.  She was simply a girl who’s view of the world—by which I mean her perception of right and wrong—was skewed by the circumstances of her upbringing.  Timber Marlow was raised as a cannibal.

I won’t lie to you—once you learn the details of some of Timber’s bloodier deeds, you may very well find it difficult, if not impossible, to sympathize with her.  I hope, however, you would feel differently if you knew Timber Marlow was born and raised in a cult, growing up on a remote combine deep in the San Bernardino Mountains.  I’ll tell you about the strange rituals she was raised to believe were normal, of the men and women she saw killed in the name of righteousness.

Perhaps it would help if you knew Timber was raped before the age of fifteen as a punishment for breaking the rules of the cult and that the seed planted inside her young womb would give her a daughter.  I’ll tell you about the courage it took for her to run away with only her little girl in her belly, entering the mainstream society most of us take for granted.

If you’re ready to learn more about Timber Marlow, the story of who she was and why she did the things she did, then I encourage you to read on.  As for me, my role here is to be something of a balancer, to tell you the whole story, to tell you the truth.  I can’t force you to understand the truth, but I can ask you to listen.  I can’t tell you that Timber did not kill, but I can tell you why.  And if you wonder why I know so much about Timber Marlow, while you know so little, well that—and so much more—will be revealed in the pages that follow.

Email ThisBlogThis!Share to TwitterShare to FacebookShare to Pinterest
Labels: author, Bernadette Marie, Inside the Outside, Interview, Martin Lastrapes, Warrior Princess