I'm very excited to have Loni Flowers with me today on the Warrior Princess Blog! Loni Flowers lives in Elm City, North Carolina with her video-gaming husband, who makes her laugh every day; two wild toddlers, who never slow down for a second; and three couch-potato dogs, who only raise an eye when foods around. She works a full-time professional job and when she's not playing on the internet or chatting on Twitter, she spends her free time with friends and family waiting for the next big idea strike. Taking Chances is her first novel.

What was the hardest part of writing your book?
Everything!  They don’t write themselves. For me, it’s finding the time and concentration to get the words down on the page. But the one aspect of writing that I dislike the most is the synopsis. To condense your story down without giving away any major plot points and make it enticing enough for the reader to pick up… it’s a pretty tough job!

How long have you been a writer?
I only began writing about two years ago. I had always been amazed at the way an author could carefully craft a story out of their imagination. I wondered what it would be like to hold the powers to create a whole new life for people you don’t even know, but come to love over the course of writing. I never thought I could do it. I don’t have much imagination… or at least I thought I didn’t. An idea struck at the weirdest of times and I wrote it down. With a lot of encouragement, I issued the challenge to myself to at least try to write a novel. What harm could come of it? Nine months later Taking Chances was born.

What books or authors have most influenced your life?
No particular book really. I read such a variety of genres it’s hard to nail down just one.
-Stefne Miller- She writes with passion and purpose. Her stories are full of life’s lessons
and I always feel inspired to do more with my life after reading one of her stories.

-Maggie Stiefvater- She writes beautiful prose. When I read her writing, I’m in love by the way it seems to flow lyrically across the page.

-J K Rowling and Karen Marie Moning- Two different genres, one’s Young Adult and the other adult. Their storytelling abilities blow my mind. To evolve a series, weave multiple storylines within its series—while each book tells its own story—and still managing to wrap it all together in the end… it’s a skill of writing I can only dream to possess some day.

How do you come up with the titles?
I try to think of key phrases my story is about, what stands out and feels right when I say the title and think of my story. I’ll make a list, get a few opinions from others that know the story and weigh out everyone’s opinions. For Taking Chances, I actually didn’t come up with it. My friend helped me. She’s a writer too and we are always sharing our work, brainstorming ideas. She came up with a list and so did I. When I saw Taking Chances, I knew it was perfect. It fits this story perfectly.

Please share with us your future projects and upcoming releases.
Currently, I’m working on another Contemporary Adult Romance which could be geared toward the older young adult audience. But that could change; it all depends on how steamy I’m going to make particular scenes. (I’m not a fan of skimping on the details.) 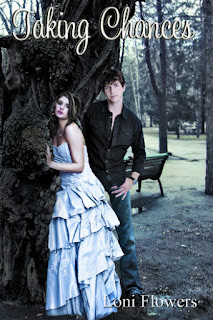 At age twenty-three, Alex has had a hard life. His parents died when he was quite young, leaving his grandparents to raise him. Right before his high school graduation, his grandparents passed on too, leaving him all alone. After losing everyone he's ever loved, Alex turns to the streets in a self-destructive pattern until he finally ends up in Springhill, where he tries to make a new life for himself.

Clair’s childhood was normal until age thirteen, when her father left the family and she never heard from him again. Consequently, her mother went into a deep depression, forcing Clair to grow up quickly. After finishing high school, Clair’s heartache over her father’s absence as well as her unbearable mother drive her to strike out on her own. But having nowhere to go and no family to speak of, Clair wanders aimlessly from town to town, homeless, and without purpose. Looking for work wherever she goes and living hand to mouth on the streets is tough, Clair discovers, but living with her mother is worse.

Now twenty-one years old, Clair has found her way to the last place she and her family took their final vacation as a family--Springhill. While in town, she crosses paths with Alex and their ensuing relationship grows faster than expected. Soon Clair wonders if coming back to Springhill and meeting Alex was the best decision or the worst decision she ever made.

Posted by Bernadette Marie at 9:07 AM