I'm excited to announce the releas of A Heart at Home, book three of An Everlasting Heart Series, by Sara Barnard!

A Heart at Home:
Can a love already tested to the limit survive on the trail to the wilds of California to their new home?  After bidding farewell to her despondent family, newly-pregnant Charlotte drops everything to follow Sanderson to a promised job out west. The journey proves more difficult than any of them could have ever imagined. Wild animals, natural disasters, and a heavy Indian presence test not only Sanderson and Charlotte’s strength and endurance, but their faith in each other as well. Meanwhile, Minerva packs up the little rock cottage to journey west in the company of infant Jay Jay and Cotton just as peace Sanderson is trying to bridge between the Army and the Snake River Indians begins to fall apart. 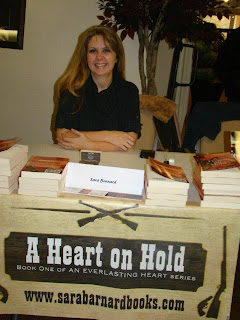 Sara Barnard is a mother of four beautiful children and author of the children’s nonfiction book THE ABC’S OF OKLAHOMA PLANTS and the historical romance series AN EVERLASTING HEART. When she’s not writing, she’s reading, hiking with her family, or tackling the ever-growing pile of laundry produced by her family of six! Sara holds her B.A. in history and is currently pursuing her Master’s in Fish and Wildlife Management. Along with their four children, Sara’s family consists of a plethora of rescue animals, each with a story of their own. Sara and her family currently make their home in the beautiful, historic hills of Oklahoma.

Posted by Bernadette Marie at 11:08 AM