Today I am pleased to have Nina Lewis! Nina Lewis wrote her first story when she was nine years old, a drama of love and jealousy set in a circus. Her best friend and she performed it to themselves over and over again, for ever changing the dialogue, conflicts and endings. It strikes her as ironically appropriate that her first published novel is set on a college campus – the habitat of many a strange, loveable or fierce creature. When she isn’t busy training animals to jump through the hoops of college education, Nina is knee-deep in her second novel, which is set in England during the French Revolution – historical romance being her favourite genre fiction. Come and check http://ninalewisauthor.weebly.com for news and updates!

Finishing it, and letting go of the manuscript. Because I am a pantser (see below), I pretty much allow the characters to go their own road. I enjoy discovering what they will say or do next; and I love the state of ‘flow’ when I feel I am just a medium for the characters. But that means that I run the danger of having many loose ends to tie up, which can get messy. The other hard part is accepting that there comes a point (typically when the editor has forwarded the manuscript to the typesetter) when you have to stop thinking about it and turn to your next project.

With this one, The Englishman, I was definitely a pantser. I started writing it in a state of near-exhaustion, desperate for some sort of creative outlet; and I didn’t force myself to plan or plot anything. I just wrote it as it came to me. It was bliss! Towards the end, though, the floor of my living room was covered in, literally, plotting paper because I had to sort out all my plotlines. Looking ahead to the historical romances I want to write next, I think a bit more plotting would be a good idea, if only because the historical context makes that necessary. I also find that history does part of the plotting for me, if I delve into it deeply enough.

I’d like to think that they will laugh at the dialogue and fall in love with the hero! To me, Giles Cleveland, the Englishman in The Englishman, is absolutely lovely; but he is not the type of the ultra-dominant alpha male. (They creep me out.) Overall, my stories tend to be a little quieter than some, exploring everyday situations and conflicts, and how you can create your own nook of happiness in a world that is fast and often furious. Anna just wants to keep her head down and quietly get on with her job, but events jolt her out of her rut and force her to stick her head out and rethink her priorities. At the end of the day, I suspect my stories are about what it takes to be happy: courage and honesty.

This is interesting, because the answer is always “Yes and No.” I think every writer is inspired by real people and real events, but in the process of writing they invariably become part of the world the writer is creating. For example, the rape allegation in The Englishman is similar to something that happened at my college (and dozens of other colleges, presumably), but once I’d put it in, I developed it according to the requirements of my story. I think there may be several people who, if they ever read The Englishman, would suspect that they are in it, but I would claim, with total sincerity, that it isn’t they, it’s only a character who resembles them in some way. “He’s not you. He’s a version of the truth of you,” as Diane Keaton says to Jack Nicholson in Something’s Gotta Give after she put him into her new stage play.
There are several real people and real events in the historical romance I am currently writing. It is set during the French Revolution, against a backdrop of Britain’s involvement in the war against France and in East India trade.

They look on with a sort of fascinated horror, because I have been working part-time for over three years now in order to have time to write. If I worked full time, I’d have a 60-hour week, and I know I would not manage to get any serious writing done. As it is, I have time to write, but the salary that I lose working part-time makes it an extremely expensive hobby. I don’t know how long I can go on doing this before I lose my nerve, though. Genteel poverty is all very well, but at which point does it flip into recklessness?

The Englishman will be published by Omnific Publishing in May 2013.
Her current project, a novel set in 1793, is tentatively called Habeas Corpus.

Summary of The Englishman 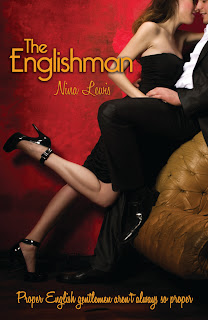 Anna has landed her dream job at a prestigious college in the South. Instead of charging ahead with her career, however, she is confronted by hurdles, pitfalls and mysteries: why does no-one restrain the demented hoarder who breaks into her office to use it as his storeroom? Who is responsible for lowering her paycheck? Is the vandalism in her department a personal attack against her, carried out by students who feel offended by her cheerfully irreverent teaching methods? Giles Cleveland, is supposed to mentor her in all this, but he’s arrogant, sardonic, condescending, disconcertingly attractive and – Anna keeps reminding herself as the temptation to start a kamikaze affair with him becomes overwhelming – absolutely out of bounds. Anna and Giles grow increasingly reckless and it is only a matter of time till they will be caught and Anna’s career will crash and burn. But when the crash comes, it’s worse than Anna imagined. And far better than she could have dreamed.
The Englishman is a sexy and romantic campus novel that asks the question many a young professional woman has to ask herself: Is it ever a good idea to dib your nib into the office ink?

“Giles, I’ve brought our new assistant professor to meet you. Anna Lieberman.”
“Professor Cleveland…”
In a split second I debate with myself whether to extend my hand or not, and decide on a gut feeling that I will not. Reserve seems a better strategy here than familiarity. He looks reluctant to even rise from his chair, let alone to shake my hand. Eventually he does get up, and my heart beats faster, nervousness becoming tinged with alarm. Tall I knew him to be, but up close his six foot something towers above my five foot four like Gandalf over a Hobbit. A Celt, with light eyes and dark hair gone prematurely gray. There is nothing remarkable about his appearance, except that a tall man, halfway between gangly and gaunt, will always look good in light brown cotton pants and a blue shirt, open at the neck and rolled up at the sleeves. Next to him I look like a complete klutz. I am furious that I have allowed Elizabeth Mayfield to put me at such a disadvantage.
I nerve myself to smile up into his face. His features are lean and regular but not wildly handsome, and there is nothing charming about him at all when he looks down at me—on me, too—with that particularly English brand of polite dislike and says,
“Dr. Lieberman. How do you do. I was…told of your appointment.”
The sound of that well-educated, faintly nasal English voice hits me in the middle of my body and contracts the muscles of my womb in a spasm of response.
I feel a spate of explanations and justifications rushing to my tongue. I want him to know that although I have been foisted on him I am sure that we will get along well, that I will do my best to honor the confidence the college has shown in me. But I say none of these things. Could not, because my tongue is in knots, and do not want to, either, suddenly, because he is so pompous and unwelcoming to a junior colleague who really cannot help the situation at all.
“How do you do, sir.”
He blinks, as if taken aback. “I assume you’ve been well looked after?”
“Yes, sir, thank you.”
“Right. Well, then…” Get the hell outta here, bitch. He does not say it out loud, but I can see the words forming behind his forehead. Evidently Cleveland hasn’t been told yet that he is to play Mother Goose to this gosling.
Posted by Bernadette Marie at 12:00 AM