Sam Rook lives in Vermont with her husband and two children. Her passion for fantasy novels began in high school with her desire to write following shortly thereafter. Software engineer by day, fantasy author by night, she strives to give her readers a chance to enjoy worlds that transport them away from the stress of everyday life.


Enjoy an excerpt from HOPE and find a Giveaway entry at the end of the post! 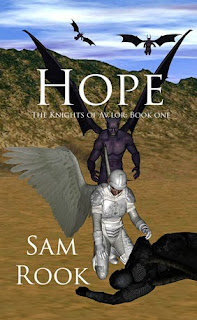 The winged knights—magically altered humans—are the only ones defending the portal from Av'lor to Earth. With defeat imminent, they find an unlikely source of hope in software engineer, Kathryn.

Kathryn doubts her life could get any worse after the death of her mother and daughter. She realizes her mistake after she arrives on Av'lor with only part of her house and hungry creatures looking for their next meal. Once the knights bring her under their protection, she discovers their angry commander is far from welcoming.

Sir Lanclor, Commander of the Knighthood, lives with the curse of betrayal. While the treachery occurred lifetimes before, few see past his guarded shell to the grim man beneath. Barely holding the Knighthood together, his grip tightens when Kathryn joins their ranks. Her stubbornness and surprising strength not only energizes the knights, but also makes Sir Lanclor question his self-imposed isolation.

With the approach of an invading army, Kathryn and Sir Lanclor must find a way to end centuries of war and save two worlds.

"That reminds me. The Ball of Remembrance is coming up in a few weeks. We should go together."

"A ball? You mean with dancing and stuff?" Kathryn remembered some of the best times in her life on a dance floor.

"Yes. Don’t sound so surprised. In the middle of a war, this is one of the few times we can relieve stress. You have to go. There’ll be dancing, singing, drinking and a ton of food. Everyone tends to relax their guard a little, maybe get a little…friendly, if you know what I mean?" Elena’s smile was infectious.

"Wait. They’re not going to be having sex on the dance floor, are they?"

"Kate, men of Av’lor aren’t like that. They’ll at least take us someplace private." Elena’s laugh made Kathryn smile and eventually join in.

"I think it would be a little awkward. I don’t know what any of the other knights look like beneath their armor. What if I hooked up with someone I work with every day? That would make things a little strained during drill the next day." An officer would be even more awkward. Sir Garrent or Sir Lanclor. Even worse, what if it was Jakara? Knife training would have a whole new meaning.

"Oh, rank is suspended for the one day and it’s pretty anonymous. Everyone’s wings will be the same color. License to party." Elena laughed and started thrusting her hips towards the bathtub with a sponge in one hand and a bottle of cleaner in the other.

Sam Rook will be awarding a $10 Amazon/BN GC to a randomly drawn commenter via Rafflecopter.

Please use the following code: