I am pleased today, to have as my guest, Deborah J. Lightfoot.
Castles in the cornfield provided the setting for Deborah J. Lightfoot’s earliest flights of fancy. On her father’s farm in West Texas, she grew up reading extraordinary tales of adventure and reenacting them behind tall ramparts of sun-drenched corn. She left the farm to earn a bachelor of science degree in journalism and write award-winning books of history and biography, including The LH7 Ranch (University of North Texas Press) and Trail Fever (William Morrow, New York). High on her Bucket List was the desire to try her hand at the genre she most admired. The result is WATERSPELL, a complex, intricately detailed fantasy that begins with Book 1: The Warlock and Book 2: The Wysard, and concludes (for the present) with Book 3: The Wisewoman. But a legal pad filled with notes and tucked away in a desk drawer suggests a possible Book 4 before the saga may fairly be said to be finished.

Deborah is a professional member of The Authors Guild. She and her husband live in the country south of Fort Worth, Texas. Find her online at www.waterspell.net. 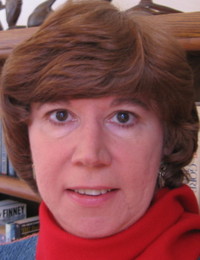 I love the “writer’s high”: that exhilarating feeling of being in the zone, hearing voices in my head as the characters talk to each other—or shout at each other, as is often the case with mine—and typing as fast as I can to get the whole scene down on paper in “real time,” while the action is happening.

I also love the chance to peek inside my subconscious. Writing provides a direct link to a submerged part of the mind that is accessible in no other way, except sometimes through dreams. But I don’t always remember my dreams!

Getting past Chapter 1 of Book One! I wasted nearly a year, just tinkering with Chapter 1. Finally I yelled at myself—the way my protagonist does to get herself to “Move!”—and after that I charged ahead, to complete Book One, then Two, and eventually Three.

It wasn’t until I finished WATERSPELL Book 3: The Wisewoman that I really understood the layers of the story. At that point I began again from the beginning. With my fresh, new, clear-eyed grasp of the whole complex series of events and all the characters’ relationships, I was able to fine-tune the trilogy and declare, at last, that it was finished. From the first draft of Book One until the finished manuscript of Book Three took me more than a decade.

Are you a plotter or a panster?

Definitely a panster. I knew where WATERSPELL began, and I had a vague idea of where it would end. But in between, the characters drove the plot. I didn’t know what would happen until it happened. The story told me what it was and how it wanted to be structured. The cliffhanger ending of Book One isn’t something I planned. That’s the way the story demanded to be told.

My degree is in journalism. After college I worked for a newspaper, then as a magazine editor and feature writer. These days I earn my living as a freelance editor for a national nonprofit organization. My first three published books were history and biography. Each grew out of research I did for magazine articles. Research is something I can get madly obsessive about. In the case of those magazine articles, I ended up with so much additional information that I had to put it all in a book, or three.

Over time, my evolution as a writer has brought me to my present reality: Now I’m a novelist. I gotta admit, this is more fun than writing nonfiction.

Everything a writer learns, though, influences her work. My background as a writer of history has helped tremendously with the historical elements in WATERSPELL. Lots of research went into getting those details right.

I’m from the Great Plains of the United States but I’ve always loved lush green mountains and tree-ringed lakes. I also love to travel. In the landscapes of WATERSPELL, readers will see nearly every place I’ve ever lived or visited: plains, mountains, woodlands, highlands, lowlands, lakes, and seashores. Parts of the trilogy were written while I lived in the tropics, in an open house on a high mountain lake. I’d work late into the night while all around me fell silent except for the splash of the waves and the occasional hoot of an owl. The perfumes of night-blooming flowers wafted in through the screen doors. It was an unearthly experience. Magical! Those eight or nine years that we spent in the tropics were an especially creative time in my life.

Thank you for the interview and for hosting me on your blog!

Now that all three books of WATERSPELL (The Warlock, The Wysard, The Wisewoman) are done, I’ve got a new work-in-progress called “Out of Mind.” It’s a story of the paranormal set in the American West of the far future. Eventually, too, there may be a WATERSPELL Book 4. Still mulling that over. 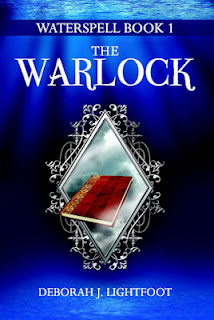 In the books of WATERSPELL, readers will hear echoes of Scottish and Irish English. You may also notice references to traditional folklore. I made a deliberate effort to pay my respects to those great Irish and Scottish storytellers who are a link to the Celtic mythology that underpins much of the fantasy genre. Readers who are familiar with Irish Fairy & Folk Tales (1892, edited by William Butler Yeats) may recognize some of the ways in which I’ve used traditional sayings. For instance, I adapted the old saying: “Rowan, amber and red thread / Puts witches to their speed.”

When I started researching the early Irish legends and Celtic myths, I was looking mainly for “the telling detail”: authentic figures of speech, colorful descriptive terms, gritty background textures. But as I read, I noticed that aspects of the mythology had their counterparts in this fantasy I was writing. Or vice versa. For instance, water often has mystical qualities in the legends: Irish rivers like the Boyne were held sacred. It’s pretty obvious from the series title—WATERSPELL—that water has magical properties in my story, too.

The traditions tell of quests, leading into the Otherworld and back. “Other worlds” figure prominently in WATERSPELL—the premise being that what’s harmless in one world or reality may prove deadly if it arrives, whether innocently or by skullduggery, where it doesn’t belong. Also central to my work is the heroic quest, traditionally undertaken to gain information or wisdom, to bring healing, or to find or restore lost objects.

I am by no means an expert on Irish legends. Given the huge number of books that have been produced on the subject and the very few of them that I’ve read, I can barely claim a nodding acquaintance. My sole aim, in working details from the legends into my writing, is to make WATERSPELL “fit” into the world of Celtic mythology the way Tolkien’s Lord of the Rings fits with traditional Scandinavian mythology. I’ve tried to create a fantasy world that is deeply rooted in an ancient tradition. I wanted it to be real.

Thank you for the guest blog opportunity.

For your enjoyment here is a sampling of Waterspell Book 1: The Warlock

Excerpt from
WATERSPELL Book 1: The Warlock

From
Chapter 1. The Swordsman

It happened too fast to hurt at first. But, oh! the blood—lots of it, streaming from a gouge that crosscut her knee.

She hunched over the wound, her masses of unkempt hair tumbling around her face, strands of it trailing in the gore. Blindly Carin fumbled in her belt-pouch for something to stanch the bleeding. Her fingers met only flint and steel for fire-making, pebbles for arming her sling, and a length of twine that was useful for everything from tying back her shaggy auburn mane to rigging a brush shelter.

Abruptly a hand grasped the shank of her leg, and another shoved at her shoulder. “Straighten up,” her captor snarled.

Carin threw back her head and flung the hair out of her eyes. “You!” she gasped. “But—” She hadn’t heard the swordsman’s approaching footsteps—a seeming impossibility through the crunchy carpet of autumn leaves. Yet here the man was, crouched beside her and brandishing a dagger. Carin’s hand flew to shield her throat, but it was her knee he put the blade to.

Stay away from me! she wanted to shout at him. She couldn’t get the words out—not in a way that made sense. As sometimes happened when she came unglued, Carin lapsed into a language of her own. The sounds that passed her lips weren’t gibberish, but no one ever understood a word she said when she got like this. Carin yelled at the man, in her own private language, and tried to wrench free of his grasp.

“Stop your noise,” he barked. He held her leg tighter and waved his dagger in her face. “If you can’t be quiet, I’ll cut out your tongue.”

Sample Chapter 1 in full at www.amazon.com/dp/B00686UIFW

Posted by Bernadette Marie at 6:44 AM