Today is the launch of Lori Corsentino's Destiny's Awakening, book one in the Tales of the Fey series from 5 Prince Publishing.  Join us today in celebrating the release.  Also leave a comment for a chance at a $10 Amazon gift card. 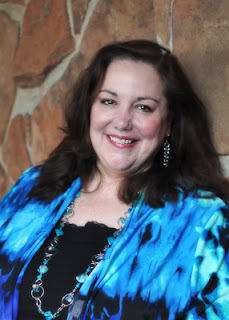 Lori’s love of reading has transcended to include penning her own tales of romance. She is experimenting with writing in several different genres, including paranormal – a definite favorite. “There is just so much you can do when you step outside the known world,” she explains “and creating a paranormal story allows you to take yourself and your readers anywhere your imagination wants to go!”

Destiny's Awakening is Lori's first foray into a planned paranormal romance trilogy. Spanning both the mortal and Fey worlds, be looking for the second novel to continue the legacy with Crown Princess Annora Ambrasia de Sha’mi’liari and Sebastian "Bas" St.
James in early 2013 from 5 Prince Publishing.


Men of the present weren’t able to hold archaeologist Evelyn Wright’s interest for long. Her passion lay with discovering the lives, loves, and legacies of men in the past.

Five hundred-year-old Prince Alexander slumbers alone in an enchanted sleep.  Imprisoned by ancient Fey magic to stave off a civil war, he awaits the woman who is destined to awaken him.

Thrown together by an unseen force, the career-minded modern woman and the aristocratic Fey Prince share a magical kiss that sparks more than mere romance.

Together they will create a key to open their hearts to a true love that will thwart the plans of an evil Wizard and save their worlds. 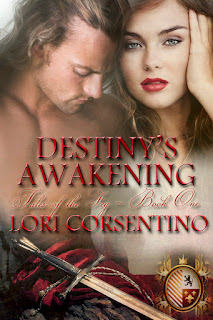 Evelyn Wright could hear her momma’s voice now, reminding her to think before she acted. “Evie,” she’d always say, “now don’t you be runnin’ so far ahead that you lose track of yourself.” She’d become familiar with those words through most of her early childhood. They weren’t necessarily a nag. Instead, they were more of a constant reminder to look both ways before she leaped.
She’d been an excitable, active child full of curiosity and a fierce desire to learn. Momma had told her once she’d often sat up after putting her to bed and cried. She’d been convinced her little Evie would never live to see five years old. The scrapes, bumps and bruises she’d accumulated during her early childhood life were legendary. When she reached her fifth birthday, then celebrated her sixth the next year, Momma said she’d breathed a sigh of relief. It was obvious her little girl was made of some pretty stern stuff.
She just might make it.
Today she was living proof of her heartiness. Happy and healthy, 26-year-old Evie had a bustling career as an archaeologist. The pay wasn’t spectacular. The hours were horrific. The industry was dominated by stuffy college professors and an over-abundance of male colleagues. None of that mattered.
She was living her dream.
She got to travel to exotic places. Egypt. Rome. Greece. She got to explore and discover new and wondrous things. Tombs. Chapels. Castles. Through her work, she pieced together clues from the past and learned about everyday lives long gone by. She was passionate about her work, well thought of, and successful.
And she was still impetuous.
Oh, her little character flaw reared its head from time to time. Most often it was when something truly out of the ordinary crossed her path. The sheer excitement of it all encouraged her to toss away rules and grown-up things. Her weakness whispered how amazing it would be to become a child again, with all its wonderment and the constant itch for more. It was at these times she invariably heard her momma’s voice suggesting caution. When she didn’t pay attention, she usually found herself in trouble.
Like now.
Today she’d jumped heedlessly off the wagon and strayed too far off her given path. She’d given in to temptation – and landed herself in a fix she had no idea how to get out of.
All because of a sword.
This morning had started out normal. Before dawn, she’d left her cabin carrying a picnic breakfast. She’d arrived at her mountain meadow right as the sun rose above the horizon. Surrounded by one of the most beautiful ranges in the majestic Rocky Mountains, the locale was one of her favorite places in the world. Teeming with life and the fragrance of wildflowers, her hideaway was encircled by a dense forest of pine trees and aspen groves. The lush verdant grasses and trees, in varying shades from lime to evergreen, were getting their first kiss of morning dew.
It was her haven. Her sanctuary away from the stresses of work and life. A perfect place to relax, eat, and have some time with nature. She refused to think about the day ahead. Instead, she enjoyed her meal. There was no need to worry. Reality would set in soon enough. She rose and grabbed her trusty walking stick. There was time to take a quick jaunt along her favorite trail before leaving nirvana. She knew it was going to be a long day at work.
A cluster of birds took flight. Evie raised her head to follow their flawless departure. She smiled and admired the beauty and grace of the winged creatures. She bet they were going out for breakfast. She was so busy admiring the scenery she didn’t notice what was in front of her until her booted foot met a heavy object strewn across her path.
The sword.
There it was. Lying there. In its scabbard. On a mountain path in the Rocky Mountains of Colorado. What were the chances of that?
It was massive. Almost four feet in length, it was housed in an elaborately decorated metal scabbard. Evie, the archaeologist, admired its shiny, long length and the swirls of etching decorating the fine, polished metal. This wasn’t any old sword. Evie, the woman, was dazzled by the richness of the metal and jeweled hilt.
She was enchanted.
Without thinking, she set aside her walking stick and reached down with both hands to lift the weapon. The second she touched it, the blade emitted a thrumming noise and a low vibration. The metal seemed to sing. A pulse ran from her hands up her arms and into her shoulders. In the next second, the scenery around her faded and everything turned to black. Every scrap of oxygen seemed to vanish, leaving her only what was in her lungs. Gone was the forest path, sprinkled with bits of sunshine filtering through the fragrant pines. Two seconds later she landed on her ass in a fancy enclosure of some kind, sword still in hand.


Contest: Please leave a comment for the author.  One winner will be randomly drawn for the $10 Amazon gift card.  This contest is sponsored by 5 Prince Publishing and Books, LLC.  The prize and/or denomination can not be changed.  Winner will need to leave contact information or check back in with the site to contact Bernadette Marie to receive their prize.  Entries after 11:59pm MT on 6/28/12 are not eligible.
Posted by Bernadette Marie at 12:00 AM