I'm very excited to have Monique McDonnel as my guest today!

What is your favorite thing about being a writer?
What I love about writing is that writing a character feels a lot like making a new friend. You spend a lot of time with them and you watch a part of their life unfold before you so it’s lots of fun. It’s also fun to write characters who say and do things you would never do yourself.

What genre(s) do you write?
I write contemporary chick lit and romantic comedy because it’s fun to write and I enjoy reading it.

Why do you think people should choose your books over another author?
Mr Right and Other Mongrels is a good fun read. It’s a perfect book to escape into and forget about life for a while. If you’ve never been to Australia it’s also a bit like taking a trip around Sydney, kind of like a little vacation in a book and who doesn’t like a vacation?

Do you write under more than one name? Why?
No just my name. I have considered writing my more pure romances (which my next release will be) under a different name but I’ve decided the marketing involved in that and all the keeping track would be overwhelming.

Are any of your characters based on real people or events?
The character of Justin in Mr Right and Other Mongrels is loosely based on a friend of mine. The similarity is more his energy and flamboyance than anything else. Teddy was inspired by a local TV personality but I haven’t met him so it’s very loose. I also named Teddy’s parents Joyce and Bob after a friend of mine’s parents who I always loved.

Where are you from?
I live in Sydney, Australia where Mr Right and Other Mongrels is set. Much of the book is set at Manly Beach which is about 5 minutes from where I live which was very handy for research. Living five minutes from the ocean means there are lots of places to clear my head when I’m struggling with my writing.

Please share with us your future projects and upcoming releases.
My second book Hearts Afire will be out in August for more information visit:
www.moniquemcdonell.com.au
https://www.facebook.com/MoniqueMcDonellAuthor
Twitter @MoniqueMcDonell 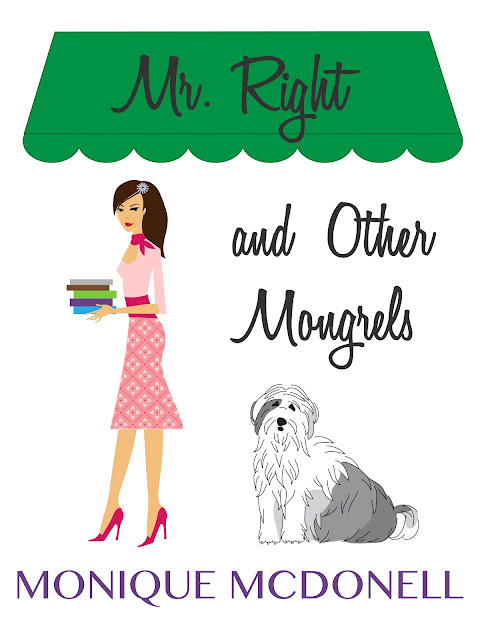 http://www.amazon.com/dp/B0086L8NBS
Blissfully happy in her own universe Allegra (Ally) Johnson is the sweet best friend everyone wants to have. Quietly and independently wealthy she runs a charming second-hand bookshop in beachside Manly. Heck, sometimes she even goes downstairs from her flat to run the shop in her Chinese silk pyjamas. It sounds like bliss. But is it enough?

When dog-phobic Allegra is rescued from an exuberant canine by the chivalrous Teddy Green, Australia’s hottest TV celebrity and garden make-over guru, her life begins to change. Dramatically!

Unaware of Teddy’s fame Allegra finds herself falling for him, despite her best attempts to resist his charm. Supported by her eccentric family and her fabulous gay friend Justin, Allegra embarks on an on-again off-again romance with Teddy, complicated by his jealous ex-girlfriend, fashionista Louisa and her own narcissistic hippy mother Moonbeam.

Will Ally be able to overcome her insecurities and find happiness with this possible Mr Right or will Teddy’s celebrity lifestyle prove to be too much? Mr Right and Other Mongrels is a light-hearted story about how one chance encounter can change your life.
Show More
Show Less