Welcome to my first interview guest of 2013, Marcy Italiano! Marcy is an aspiring writer from Waterloo, Ontario. She lives there with her husband and twin boys. (Something we have in common...twin boys!) Her current works include KATRINA AND THE FRENCHMAN: A JOURNAL FROM THE STREET – 2009, SPIRITS AND DEATH IN NIAGARA –2008, PAIN MACHINE - 2003. Marcy has also written many dark fiction stories, the most recent publication is “Dance at My Funeral” in the Magazine of Bizarro Fiction, Issue 4. She has published poetry in both magazines and online. She also works on songwriting with “G”. She has also just finished her work on THE STARVING QUEEN.

Anorexia is a monster and her name is the Queen. Jasmine tries to be tough and in control. When depression creeps in, her parents, new boyfriend Jason and best friend Allison, don’t recognize the signs. But the Queen does, and she wants Jasmine.


Marcy is presently looking for agent representation.She hassome new short stories to shop around this year, and "they seem to have become stranger than anything I’ve written before," she says. Please welcome Marcy Italiano. 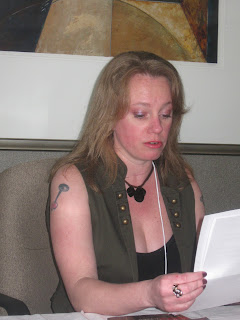 I’m a pantser for the most part. I usually have the concept for the story with major plot points, but getting from A to B is a journey, and the C-end is rarely anything I would expect to write when I start the book. My characters always surprise me as they evolve. I figure if the characters can keep me entertained, the readers will like them, too.

I want people to feel something, not just put the story down with a “huh” and never think of it again. When readers come up to me and say things like, “That is exactly what happened to me” or “I’m not alone feeling/thinking that” I know I’ve succeeded at reaching out. If I can create an alternate reality that people can not only believe in, but feel that it personally reflects them in some way, I have done my job.

Absolutely. My characters are usually a combination of many people. Or at least a few. So far I have written no characters that are one person only, I have not dropped a real person into my fiction. I have taken my favourite or least favourite traits from many people in my life and match them up to make amalgamations that become very flexible.

As for events, this one is a little more slippery. I have taken real events, real times in my life and squeezed them through a warped, Marcy-mirror and what I get is a strange reflection of those times. Occasionally, there is a moment that is extremely true, and so specific to the story that I could not possibly change a detail. I have been asked many times about the “animal scene” in Pain Machine, and yes, that moment did happen. But the book is not a chronicling of my story, it’s a version that opens up for all people who live with that kind of extreme pain. In the novel I just finished, The Starving Queen, I imagine readers will be able to pinpoint the all-too-real moments as well.

It’s always hard to know what others might find interesting. There are a lot of quirky things about me, like having feet that have two sizes difference. I have interesting stories to tell about travels and disasters along the way, such as being caught in Katrina in New Orleans. Or, I could talk about strange life events like having Fibromyalgia for twenty years, not being able to smell for half my life, and the cherry on top, having identical twins. Ask me anything! I’ve always got a story to tell.

I like to read, paint, exercise, write songs with my husband, sing, I have been caught knitting, along with many other hobbies I can’t keep up with. When the boys are not fighting, we play some of the most awesome games. There are a handful of TV shows I like and will tape, but they have to be awesome. That’s right I said I “tape” shows, because I am old, and we used to use video tapes. I also say converter. The first video game I ever played was Pong, and my Dad was stunned that we were controlling something on the TV. I also like wine. And, Chocolate Mint Martinis on a special occasion.

Posted by Bernadette Marie at 6:32 AM