Release Day is here! The second book in the Aspen Creek series, Unexpected Admirer is now available! Join me today and all weekend (April 29, 2013-April 31, 2013) for a Launch Weekend full of prizes and fun! www.facebook.com/authorbernadettemarie 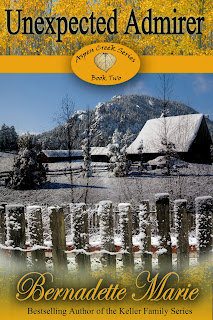 Unexpected Admirer
The bright lights of stardom are sometimes too bright.

Jesse Charles, the chart topping, pop-sensation has fallen head over heels in love with small town biology teacher Melissa Mathews. However, not only does their age difference worry her, she’s a widowed mother of a young son who needs her attention. But her unexpected admirer isn’t one to give up so easily. He’s willing to give up everything just to make them a family and settle in her home town—but his manager and mother have a different opinion.

Jesse will have to convince Melissa that he can be the perfect husband and father before he loses her—and loses his career over stories circulated by the easily persuaded media.

In 2007 – after marriage, filling her chronic entrepreneurial needs, and having five children – Bernadette began to write seriously with the goal of being published.  That year she wrote 12 books.  In 2009  she was contracted for her first trilogy and the published author was born.  In 2011 she (being the entrepreneur that she is) opened her own publishing house, 5 Prince Publishing, and has released contemporary titles and began the process of taking on other authors in other genres.

Bernadette spends most of her free time driving her kids to their many events.  She is also an accomplished martial artist with a 2nd degree black belt in Tang Soo Do.  She loves to meet readers who enjoy reading contemporary romances and she always promises Happily Ever After.

Unexpected Admirer Excerpt:
A crowded arena on a weeknight was not where Melissa Mathews wanted to be. She’d spent her day teaching thirteen-year-olds the fundamentals of biology, attended a staff meeting, and drove an hour to Grand Junction. She was beat.
But when she looked over at her son, who stood next to her, his grin as big as the sun, she knew she’d recuperate. After all, it was her fault they were standing with thousands of people who chanted Jesse Charles’s name. She’d won the tickets to see the pop star on the radio. The show had been sold out for months, and she didn’t have the funds to take her son anyway.
It was a mystery to her why he even wanted to go. Jonah was a huge Jesse Charles fan, but Melissa wasn’t. Oh, he seemed to be a fine role model, but between her son playing his music morning and night and the kids at school incessantly talking about him, Melissa could care less about the man.
And the night was just beginning. No, she couldn’t have just won some general admission tickets. She won the whole package. A nice dinner at a local restaurant. Front row tickets to the show. And what would a night like this be without meet and greet passes for later.
Jonah was in heaven.
Melissa was in a teenager-fueled hell.

Jesse Charles paced back and forth in his dressing room. He’d been performing since he was ten, professionally since he was fourteen. However, stage fright was a real thing and he had it bad.
His assistant, Bryce, was busy taking notes and talking on his cell phone in the corner. He’d thought his manager would take the time to fly to Colorado to catch the show, but again, he was busy with his own, fantastic life.
Jesse let out a sigh. His career was nothing less than spectacular. He was the number one recording artist in America, and the world had taken note.
But at twenty-five, Jesse Charles was tired.

Melissa fidgeted with the backstage pass around her neck. The woman at the radio station had told her to keep it under her shirt. She’d seen people mobbed over them. It was killing Melissa to have it pressed against her skin, but the last thing she needed was to have it ripped from her neck. Jonah hadn’t been happy about tucking his in either, but he’d done it. What did it matter anyway? He was going to meet his idol. All Melissa could hope for was to be in bed before two a.m. and that maybe Friday would be quiet for the middle-schoolers she’d have to teach—but she knew better than that.
The lights in the arena dimmed, and the crowd around her went wild. She looked over at her son. An enormous smile permeated his lips. He hadn’t been so happy in a very long time. Melissa owed him this night. She put her arm around him and gave him a squeeze just as the arena filled with lights of all colors. A whine of a guitar pierced her ears, and from the center of the stage in a smoke-filled cloud, Jesse Charles emerged in all his glory.
She had to admit, the atmosphere was infectious. Girls swooned and screamed. Jonah clapped his hands and sang along with the songs she was familiar with, but she didn’t know the words. Never would she have expected to enjoy herself, but among Jesse Charles’s fans, she was happy too.
The show was loud and spectacular—and never ending.
Melissa looked down at her watch for the third time. The show was moving into its second hour, and the man hadn’t taken a break. He’d sung and danced the entire time—he had endless energy. She, on the other hand, was exhausted.
Melissa scanned the crowd. She was sure she was the only person aware of the time. She looked back up at the stage, and at that moment, she was sure her eyes connected with Jesse Charles’s. The very moment hit her.
She diverted her eyes. Certainly he was that good of a showman to make the entire audience feel as though they were the only ones in the room.
It wouldn’t be long before she’d be right in front of him, shaking his hand. But that was all for Jonah. She wasn’t interested. She was sure he’d say hello, sign a picture, and move on to the next person. Yes, that would be how it would go. She told herself there really hadn’t been any eye contact. Thousands of scantily clad girls screamed his name. If he had seen her, it was probably a look of disgust for someone so average in his crowd.
Jesse Charles went about belting out the song of the moment. He danced his way to the side of the stage, motioned to someone, and without missing a beat, he was back at center stage making the crowd go wild.
A few minutes later, Melissa felt a hand on her shoulder.
“Ma’am, would you mind coming with me?” An enormous man with a security shirt was standing next to her.
“I’m sorry,” she yelled over the music. “Did I do something wrong?”
“If you wouldn’t mind just coming with me.”
He was trying to guide her away from her seat. “My son!”
She reached for Jonah and grabbed hold of his arm and then quickly picked up their coats.
As she followed the man, another security guard stepped in behind them. Jonah moved up closer to her.
“Where are we going?”
“I don’t know.” She reached out for the man in front of her as they headed toward the side of the arena. “Sir, where are we going?”
“I’ve been asked to take you backstage.”
Melissa let out a breath. “Is this for the meet and greet?”
“No.” The guard narrowed his gaze on her.
“Oh, we have passes.” She pulled the pass from under her shirt.
“No, ma’am, this has nothing to do with that. Mr. Charles would like to sing to you. He’s requested you on stage.”
Certainly there was some kind of mistake. The radio station hadn’t said anything about getting on stage.
Her heart pounded faster than the rhythm of the song blaring thought the arena.
Jonah had grabbed hold of her hand. “Mom! He wants to sing to you!”
“I don’t like this.”
The men were leading them down a corridor The music was muffled, but as they turned the corner, she could see the stage and Jesse Charles was only a few feet in front of them, performing for thousands.
“What if I don’t want to do this?”
The security guard gave her a shrug.
Jonah stepped between them and looked up at her. “Mom, this is fun. Go.”
When did a ten-year-old tell his mother what to do? But then she noticed the glimmer in his eyes and the smile that still turned his lips up at the corners. She couldn’t let him down.
She handed Jonah her coat, straightened her clothes, and ran her fingers through the wild curls which went every which direction. This had to be some kind of a joke for the superstar. What a mother wouldn’t do for the joy of her child.

Posted by Bernadette Marie at 10:36 PM