An interview with author Jamie Marchant

Today my I am pleased to interview author Jamie Marchant, author of Deamons in the Big Easy.

Jamie Marchant lives in Auburn, Alabama, with her husband, son, and four cats, which (or so she’s been told) officially makes her a cat lady. She teaches writing and literature at Auburn University. Her first novel The Goddess's Choice was released in April 2012 from Reliquary Press. She released Demons in the Big Easy in January 2013. She is hard at work on the sequel to The Goddess’s Choice, tentatively titled The Soul Stone. Her short fiction has been published in Bards & Sages, The World of Myth, A Writer’s Haven, and Short-story.me.

The high. When the words are flowing, it’s like a drug.

Fight scenes. I’ve never particularly enjoyed reading fight scenes and often skim through them, and that’s made them hard to write. My writers’ group makes fun of me because it the rough draft of my work, I’ll often have “Insert fight scene here” instead of the actual fight scene.
Are you a plotter or a pantser?

I’m a more fly-by-the-seat-my-pants kind of writer. I never made a written outline or plotted a story arc. I had a basic idea of where I wanted to end up, although I didn’t know exactly how Demons in the Big Easy was going to end until I was nearly there. A lot of where the story goes depends on the characters. They tend to take on a life of their own.

I started reading stories about the Man from Mars for my older sister when I was about six. I finished my first novel in high school (not that it was publishable). I got sidetracked for a few years when pursuing my Ph.D. in Literature, but I have been back to my first love for about 12 years.

I usually have more than one project going. That way if I’m having difficulty with one, I can work on another. 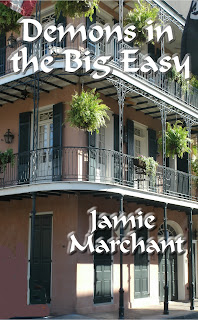 Title: Demons in the Big Easy
Author: Jamie Marchant
Blurb: Adventurous in her youth, Cassandra built gateways between Domhan and its parallel realm of Earth. Now she’s too old for that kind of thing. But something is making it easier for demons to pass into Domhan. Not only that, but their behavior becomes inexplicable: whenever Cassandra banishes one, it laughs at her rather than resists, and it promises it will soon devour her essence and that of every resident of her small village. Cassandra is certain such a thing is impossible, for strong wards protect her village.
But then Cassandra’s granddaughter Aine falls through an unstable gateway. Cassandra is the only one within a hundred miles capable of creating a gateway and bringing Aine back. Despite her aching joints, Cassandra goes after her, and the gateway lands her in New Orleans. But something goes wrong with her tracking spell, which indicates Aine exists in four different places at once. As Cassandra struggles to find the true location of her granddaughter in the Big Easy, she discovers the source of the demons’ confidence.  Now, with an unlikely pair of allies—her timid granddaughter and a homeless man who may or may not be crazy—she has to not only save her granddaughter but also prevent both Domhan and Earth from being overrun by demons.

Enjoy an excerpt from Demons in the Big Easy

Cassandra felt eyes watching her and turned. On the other side of the fence, just off sacred ground, stood a demon. It smiled at her revealing nasty, yellow teeth and a forked tongue, its cat-like eyes glowing with satisfaction. “Good e’vn, powerful one.” The demon was short, but bloated, as if it had just consumed someone’s essence, but it was too small to have gotten past the wards she had guarding the village.
Cassandra’s lips tightened as she wondered who had been caught outside the wards. She hoped it wasn’t one of those who relied upon her for protection. She’d warned them not to be without the village boundaries after sunset. She readied her staff to perform the ritual of banishment, but the demon’s behavior was odd. “Why have you sought me out? You know I’ll simply send you back where you belong.”
The demon laughed. “Today, yes,” it hissed. “But soon there will be enough of us to overwhelm your wards and devour your village.”
Impossible. The veil might be thinner, but not thin enough for demons to cross in multitude. It would take far too much energy. “Your idle threats don’t scare me.” Cassandra took her staff and began to draw a pentangle in the snow, the first step of the banishment ritual.
The demon smiled wider as the pentangle took shape; it should have cowered in fear. “I will feast on you yet, powerful one, and the meal will be delectable.” It licked its thin lips with its forked tongue and made no effort to thwart the banishment. Any effort it made would have been futile, but still, she usually had to do the ritual while fighting them off, a lapse of concentration on her part usually fatal. This demon just watched as if rather amused by the spectacle.
Cassandra finished drawing the pentangle and stood in the center. She planted her staff and began to chant in the old tongue. Directing her will and her energy into the staff, she pointed it toward the demon. The demon began to fade as she pushed it back beyond the veil. Usually, at this point, the demon would scream and curse her name. This one just laughed again and spoke a single word, “Soon.”