My baby has come home! This is how I feel today! My first novel that was ever published is re-released today and is home at 5 Prince Publishing!  Please check it out!

If you're a fan of my Keller series or a lover of contemporary romance, I know you'll enjoy the journey of Sophia and David as they again are the victims of their Grandmother and Aunt's matchmaking schemes. 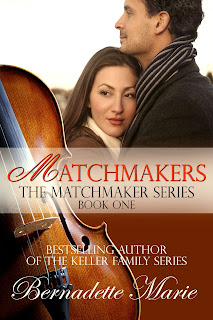 Matchmakers
Cellist Sophia Burkhalter thought ten years in Europe performing with an exclusive ensemble would have made it clear that she wasn’t a candidate for her grandmother’s matchmaking. After all, she’d walked away from the man she loved, leaving him back home in Kansas City.
David Kendal had fallen in love with Sophia, a match orchestrated by her grandmother and his aunt. However, the unexpected appearance of the daughter he never knew he had—and Sophia’s sudden, subsequent departure for Europe—thrust him into the role of single father.
Carissa Kendal has only ever wanted the best for her father. It doesn’t take long for her to realize that the very woman who broke her father’s heart might be the one to make them a real family.
Can Carissa and the women who originally played matchmaker to the duo convince them that love is worth a second try? Or will careers and past mistakes tear them apart forever before they have a chance to reconcile?

Bernadette Marie has been an avid writer since the early age of 13, when she’d fill notebook after notebook with stories that she’d share with her friends.  Her journey into novel writing started the summer before eighth grade when her father gave her an old typewriter.  At all times of the day and night you would find her on the back porch penning her first work, which she would continue to write for the next 22 years.
In 2007 – after marriage, filling her chronic entrepreneurial needs, and having five children – Bernadette began to write seriously with the goal of being published.  That year she wrote 12 books.  In 2009 she was contracted for her first trilogy and the published author was born.  In 2011 she (being the entrepreneur that she is) opened her own publishing house, 5 Prince Publishing, and has released contemporary titles and began the process of taking on other authors in other genres.
In 2012 Bernadette Marie found herself on the bestsellers lists of iTunes and Amazon to name a few.  Her office wall is lined with colorful PostIt notes with the titles of books she will be releasing in the very near future, with hope that they too will grace the bestsellers lists.
Bernadette spends most of her free time driving her kids to their many events—usually hockey.  She is also an accomplished martial artist with a second degree black belt in Tang Soo Do.  An avid reader, she enjoys contemporary romances with humor and happily ever afters.

Posted by Bernadette Marie at 8:24 AM