I am so thrilled to share with you the newest release from Award Winning author Ann Swann. Stutter Creek is an amazing Romantic Suspense that will keep you reading!

Ann Swann is the author of All For Love, a contemporary love story published by 5 Prince Publishing.  She is the author of Stevie-girl and the Phantom Pilot, and Stevie-girl and the Phantom Student, tales of the supernatural.  She has also written numerous award winning short stories.  She lives in West Texas with her husband and their rescue pets.  She loves libraries and book stores and owns two different e-readers just for fun.  Her to-be-read list has taken on a life of its own.  She calls it Herman. 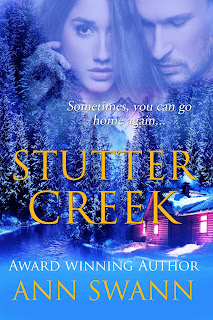 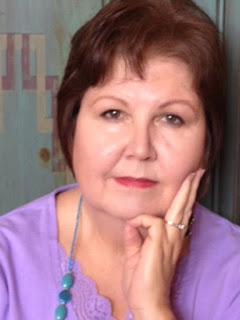 Stutter Creek
She went looking for an old flame and found a serial killer instead.
When Beth lost her father to cancer and her husband to another woman, she didn’t know where to turn.  So she retreated to the family cabin at Stutter Creek.  Some of the best times of her life were spent at that cabin.  That’s where she met her first crush, a boy named John.  But that was many years ago . . . could he possibly still be around?  Or would she find something sinister instead?

EXCERPT of Stutter Creek:
Amanda Myers was making a conscious effort to keep her heavy foot off the Toyota’s gas pedal when she spied what appeared to be a small boy standing beside the road. An old fashioned newsboy cap nearly obscured his tiny face.

Mandy hit the brake and steered the Celica toward the gravel shoulder. With a practiced hand, she quickly texted her coworker, Myra, and asked her to concoct a cover story for her tardiness.
The kid had seemed very small in silhouette—maybe five or six years old—and no house or vehicle in sight.
When Myra texted back to say the boss was on the warpath, Mandy replied, “Well, just tell him I stopped to pick up a boy on the edge of town. That should really turn his face red!” It was an inside joke. Everyone knew when the boss’s face was red it was wise to give him a wide berth.

Myra sent back a row of question marks.

“L8R,” Mandy responded. She looked all around. She had assumed the little guy would come dashing up to the car as soon as she had come to a stop. But even when she could no longer hear the crunch of her tires on gravel, he still hadn’t materialized.

I didn’t pass him by that much.

Craning her neck to see past the Toyota’s blind spot, Mandy dropped the phone into the center console drink holder and shoved the gearshift into park. A thick stand of live oaks cast a deep shadow over the bar ditch. The setting sun made the trees appear as black-paper cutouts in a landscape collage.
After checking her mirrors to make sure no one was behind her, Mandy pressed the button to lower the passenger-side window.

It was almost all the way down when a man yanked open the door and exploded into her world like a tornado into a trailer park.  Her hand flew to the gearshift, but she couldn’t engage it.  Even as her flight instinct kicked in, part of her mind was telling her this was almost certainly the same strange guy who had requested her section at the restaurant the night before.  His eyes had seemed to follow her all around the crowded dining room, and his oily stench had made him stand out like a spot of mold on white linen.

Mandy drew in breath to scream, her hand scrambling across the console for her phone or the gearshift, whichever came first, but he was too fast.  With lightning speed, he dove across the seat and slapped a rectangle of duct tape across her mouth.  At the same time, he buried his free hand knuckle deep in the thick blonde braid at the base of her skull even as his other hand slid down to her windpipe and began to squeeze.
Mandy’s fight instinct kicked in then, and she whipped her head back and forth in an effort to dislodge his hands. His stench, and the oily filth of his unkempt hair, was sickening. She clawed at his eyes, ripped at his skin, but it was no use.  The psycho laughed and simply leaned his head back out of her reach.
That’s when Mandy began to claw at her own face, attempting to scratch the silver tape off her mouth. It didn’t matter. There was no one around to hear her scream even if she could have gotten it off.
She wasn’t a quitter, though.  Mandy did her best to get her feet out from under the steering column to kick. But he was pressing down on her with his whole weight. She was trapped. Calmly, the psycho took one hand off her throat, doubled up his fist, and hit her so hard the back of her skull struck the driver’s side window with an audible whap!

Then he went back to her throat. As his deceptively thin fingers crushed her windpipe, Mandy’s grip on reality began to loosen.  Tiny strobes flashed inside her skull.
He squeezed even harder, the tips of his fingers disappearing into the flesh of her throat.
At the last second, as her world began to grow dark, a memory flashed through Mandy’s mind. She remembered how as a small girl of six, she had begun to worry about running out of air because if you couldn’t see something, how did you know how much of it was left? She could see balloons, though. So she had begged her mom to buy several packages of the colorful party staples, which she’d then blown up and stored in her bedroom closet. Her mom humored her. Her older sister, Kami, however, couldn’t let a good thing like that go unnoticed.

She had waited until Mandy was out, then she’d tied all the balloons together and attached them to the stop sign on the corner. Mandy had felt so humiliated when she came home from school and saw them. She’d wanted to get them down and put them back in her closet, but she couldn’t bring herself to do it. She would have let herself run out of air before giving her sister that satisfaction.
The balloon bouquet had wilted quickly in the hot New Mexico sun.
Now, even as she was dying, Mandy grasped the irony of that memory. She really had run out of air. Her last coherent thought—as the fireworks behind her eyelids exploded in the grand finale—was of those wilting, multicolored balloons.