An interview with author Monique McDonell

I am an Australian author who writes contemporary women's fiction including chick lit and romance. I live on Sydney's Northern Beaches with my husband and daughter, and despite my dog phobia, with a dog called Skip.

I have written all my life especially as a child when I loved to write short stories and poetry. At University I studied Creative Writing as part of my Communication degree. After wards I was busy working in public relations I didn't write for pleasure for quite a few years although I wrote many media releases, brochures and newsletters. (And I still do in my day-job!)

When I began to write again I noticed a trend - writing dark unhappy stories made me unhappy. So I made a decision to write a novel with a happy ending and I have been writing happy stories ever since.

What genre(s) do you write?
I write chick lit and contemporary romance with a sense of humor. I hope that when people read my books they have a smile on their face.

Are you a plotter or a pantser?
I am a combination. I’ve never heard a good word for that actually. I usually start at the beginning and write the first third or so and then I sometimes, though not always go and plot out the rest of the novel. Then again sometimes I do all that and the characters take me on a different journey than I expected. Alphabet Dating doesn’t end at all the way I planned it but sometimes you just have to listen to the characters.

Do you write under more than one name? Why?
I’m about to start releasing books a series of books I have written under a pen name, in fact the first book will be out in June.(Monica Donnelly) They are more traditional contemporary romance, without the humor and they are much steamier than what I normally write. Writing them under a different name just feels like the right thing to do. I’m not looking forward to promoting under two names but I think it’s freeing for my writing.

How would you describe yourself if you were “speed dating” your readers?
My books are fun light reads where you will find women who are looking for love, friendship and family. Take me to the beach or let’s curl up in front of a fire we’ll have a good time.

Do you work on one project at a time? Or do you multi-task?
I work on more than one project at a time. Right now I’m editing my next novel Building Attraction, which will be out in July and I’m writing a book for my new series. I can write and edit at the same time, but I can’t write two books at once, sadly, because the voices get muddles. That is a real shame because I think that would be very handy. 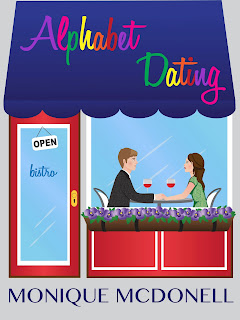 Alphabet Dating
Serena’s friends have a plan to get her dating again - 26 dates in a month - one for every letter in the alphabet. What could possibly go wrong?

When Serena Sanders reluctantly agrees to participate in the Alphabet Dating Plan she knows it will be tough but there’s so much she hadn’t factored in. Who knew men were so complicated? Not Serena.

As she begins dating her way through the alphabet she starts to learn more about herself and her friends than she ever expected as secrets and hidden agendas are revealed. Alphabet Dating is a love story – a tale of lost love, unrequited love, platonic love and ultimately it’s about learning to love again.