On the eve of the release of the 6th Keller Family series book, I thought we'd have some fun! Gotta love having fun! So here is a little bit about the book itself! Now before we get going Don't Forget to join me for a LIVE web event:


Bestselling Author Bernadette Marie is known for writing about families


readers want to be part of, and contemporary romances and that always
promise a memorable "Happily Ever After". Her series The Keller Family has
graced bestseller charts on iTunes and Amazon since its release in 2011.


characters and discusses the release of the latest Keller Family story "Love
Songs".


We'll open the chat lines for Q&A's, and a chance for readers to win free


(i.e., this will take you directly to the BCTV login page) 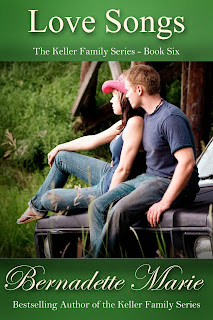 Warner Wright is looking for that big break into country music, but the reputation of his ex-stepmother is getting doors slammed in his face. But when he hears the angelic voice of Clara Keller—he knows she’ll be his ticket.
When the talented Clara Keller and the sometimes awkward Warner Wright get together there is a spark even bigger than Nashville. Opportunity is going to knock on their door, but fame can be a tricky bedfellow.
Making beautiful music will be the easy part. Facing Warner’s past might corrupt them both.

Now anyone who has paid attention knows I love my country music. I was raised on Kenny Rogers, Dolly Parton, and Alabama to name a few. I can belt  out some Patsy Kline and not sound too shabby, though you probably won't catch me doing it.

Why did I set the Kellers in Tennessee? In Nashville? It started with that first book when I had that brain storm of Regan falling into the lap of the guy on the bus and she was wet because of a rain storm. Well in Colorado we have lots of warning that its going to rain. But when I was in Nashville, oh about 1994, I witnessed my first sky opens and rain crashes around you kind of storm. And that is where the story began.

When I got to Clara's book I actually had chosen the cover first and it sparked the theme of the book! Nashville and singer/songwriters go hand in hand. I was lucky to have Randy Sayner agree to be a character in the book, which came in handy as he is one of the next up and comers coming out of the country music scene. (check him out at www.RandySayner.com) I think I've always been a bit obsessed with singers, and yes in my kindergarten book is says that is what I wanted to be when I grew up. But this was a fun way to get to do that.

When you write a book, another fun part is adding the acknowledgments. People inspire you or help you along the way in every book.  Every one of my books is dedicated to my husband. You've heard me say it, it's in my bio, I write happily ever after because I live it. He is my biggest supporter, the one who has to deal with every emotion these characters throw at me, and like an accent if someone speaks around me--I catch the emotions.

Here are the acknowledgements for Love Songs and a little background too!

To my 5,
You inspire me to be better every day!

(These are my 5 sons. They make me proud and they are proud of me. Can it get any better than having your sons get as giddy as you do about books? )

To Mom, Dad, and Sissy,
I love you. This family I write about is great because I have you all to draw from.
(These three have been there since the first pages were ever written. They never discouraged my writing or my piles of paper or the sound of the typewriter. My mom built the first computer I ever used. My dad gave me the first typewriter I ever had. And my sister tries to be the first person to buy my books. She's gained some competition in the past few years, but she still pushes the button as early as she can!)

To Randy Sayner,
How can I say thank you enough for sharing your talent with me, your songs, and your wisdom! You made this book what it is and we’re blessed to have you in our lives!
(Okay, okay...I can't talk about him enough. Well, here's a secret. Randy is my husband's cousin (therefore mine) His sister was one of my very first readers way back with Matchmakers. So keeping it in the family it was an honor to include Randy in this book. Now, I kid you not when I say he's the next big thing. And you're all going to say you saw him here first. Please check him out. This guy has some crazy talent!)

To June,
How many times have you come to my rescue? Chalk up another one. I can’t believe how lucky we were to get you in our lives in 2003! I’ve had you by my side longer than Mr. J!
You are a blessing!
(How did I meet June? I was blessed to meet this woman in 2003 when my oldest son started Kindergarten. June was, and still is, the librarian! I couldn't have told you on that day (even before all 5 kids were born) that she would become an important part of our lives on so many levels! You never know who you'll meet and what they might mean to you.)

To Connie and Marie,
Not a day goes by that I think I could do this without you. You are my cheering squad, my voice of reason, my head when it falls off. Thank you.
(Connie was a karate parent too. Our kids climbed the ranks together, but our friendship didn't start until her karate career ended. It's again funny how you meet someone who will be very important in your life. Connie has always been one of my biggest supporters. When I was writing A Second Chance she was going through Cancer treatment and WOW what a bond we began. I couldn't do this without her.  Marie is much the same story! She has to be one of the most organized-no crud taken-get this done kind of people I've ever met! She keeps me in line and makes me better at what I do!)

To Country Music
Country music makes me happy and so do those who sing it. Thank you to Tim McGraw, Luke Bryan, Blake Shelton, Miranda Lambert, Carrie Underwood, Dierks Bently and all the other performers I mention in my books. Your music inspires me. And to Dan and Shay, your story made me realize there was a fabulous ending to this book!
(Yep, these people are mentioned in my books and Sirius XM The Highway! They are mentioned in my posts! They are the inspiration to which I write. I'm a HUGE fan of Luke Bryan and Blake Shelton! And as I was lost in the middle of Love Songs I heard an interview with Dan and Shay. They were recording and on the radio and hadn't even known each other a whole year! Yes, crazy things like that can happen! So I say to all those want to bes and can bes go be!!!!)


So where will Love Songs be? Check out www.5princebooks.com/bernadettemarie.html and all the buy links will be there.

Without my readers I would't enjoy what I do...so Thank you all!!!

Now, how about a little contest?  I have some 5 Prince Publishing Prize packs! In fact I have 3!!!  Leave a comment below and on Friday Morning 3 random winners will be drawn and announced!!! So make sure to follow your comment feed so you know if you won!!!

Bernadette Marie has been an avid writer since the early age of 13, when she’d fill notebook after notebook with stories that she’d share with her friends. Her journey into novel writing started the summer before eighth grade when her father gave her an old typewriter. At all times of the day and night you would find her on the back porch penning her first work, which she would continue to write for the next 22 years.


In 2007—after marriage, filling her chronic entrepreneurial needs, and having five children—Bernadette began to write seriously with the goal of being published. That year she wrote 12 books. In 2009 she was contracted for her first trilogy and the published author was born. In 2011 she (being the entrepreneur that she is) opened her own publishing house, 5 Prince Publishing, and has released her own contemporary titles. She also quickly began the process of taking on other authors in other genres.
In 2012 Bernadette Marie began to find herself on the bestsellers lists of iTunes, Amazon, and Barnes and Noble to name a few. She has held the #1 positions on Amazon and iTunes for Romance, Contemporary Romance, and all eBooks.

Bernadette spends most of her free time driving her kids to their many events—usually hockey. She is also an accomplished martial artist with a second degree black belt in Tang Soo Do. An avid reader, she enjoys contemporary romances with humor and happily ever afters.