A strange phenomenon casts unending night and irrepressible feelings of lust over Kaliana. She must discover the cause, but she can't seem to stay focused...

When night falls over Meso and does not end, Chancellor Kaliana and Master Ganshi must find the cause. As they search for the truth, they discover more than science can explain. Within the night lives a boundless sexual energy, turning scholars into seducers and musicians into man eaters. Beneath the earth a fire moves and rumbles, bringing forth a creature that will envelop and consume all that call it. In the endless night, all boundaries are broken. Can Kaliana and Ganshi overcome the onslaught of lust long enough to restore the balance between shadow and light? 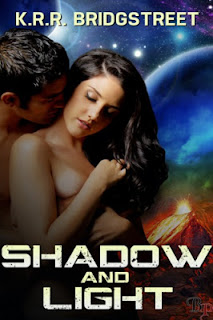 When the sun shone, it flooded the valley with a beam that struck and splashed between twin mountains. It danced outward, skittering through the mountain valley toward opposite civilizations advancing. The peoples moved each to the other, slowly, like seeds in the earth waiting for the right combination of warmth and moisture to coax their substance from the soil.

To the east, light meandered over green terraces that descended between rock-lined funnels, joining the streams that irrigated miles of pasture, and wound a slow and steady route to the geometric city of Meso. A solar system of paved streets orbited a central blinding compound of glass, stone, and steel. The people of this city reflected their own reverence for the aesthetic machinations of the universe they tried to emulate. Their lines were sharp. Their angles pristine. Their movements productive and efficient. Sunlight that did not succumb to the walls of glass enclosing the structure melted over the bodies of these people. The rest flowed over the sharp angles and refracted, fractioning crystalline and settling over the far eastern forest, where it disappeared into the maze of trees.

Light spared none in the west. The earth cracked beneath its weight, crushing moisture from rocks and opening the veins of plants, desiccating. It painted self-portraits on jagged sunset bluffs, gazing into the mirror of dominion. The light enveloped completely any river that once shaped the red and orange cliffs, leaving a dusty trail for rodents and lizards dashing in and out of shade. Men and women scratched hoes in the dirt, pulling free meager crops that seemed as if they sprouted old and worn. The men and women lived, and the children played and learned, among a vast cornucopia of poisons and potions.

They were hard, shaped by the same wind that aged the banks of empty riverbeds. The people's hard-bought respect approached religious devotion to the dry land. Sobered by the relentless light, the people of the western border mercilessly clung together, commanding of the earth just enough to survive.

This is the light from which the young man traveled.

It happened at Two Mountains Standing, under the moon of the summer solstice. Presiding over the ceremony, the moon bathed the dancers in the pale white reflection of the sun. The dancers disappeared and reappeared in flickers of shadow and light, reflections of the red and yellow fire surrounding them and within them. Their bodies surged, throwing black shadows across the sacred fire circle and onto the two mountains framing them. The moon smiled down on the shadows looming giant on the mountainsides, mimicking their owners' frenzied movements.

The shadows came together and parted, came together and parted, circled and leapt over the fire, leaping from mountain to mountain. Sweat ran down the dancers' arms and legs and they pounded it into the packed earth. A turbulent, wordless harmony brought forth the incantations. Curved backs raised heaving breasts higher, spines rippled, and hot, slippery tits bounced in the bodies' rhythmic undulating.

In the center of this frenetic circle a man lay, immobile. He was a stranger to this place. A solid short mound of earth covered each of his arms; his legs extended toward the sacred fire and also disappeared into the earth. When dancers leapt the fire, they sometimes landed on his submerged arms and legs, pounding them deeper into the ground. The man's eyes stared unblinking up at the moon. No lines marred the man's face, which was dark and unmoving. A braid ran down the back of his head, and the tail of it fanned out loose behind his shoulders where he lay. His eyes were fixed on the moon.

There was no telling how many dancers circled the fire. Sweat poured from their bodies, turning the packed earth to mud. The mud splashed with each pounding step, covering the dancers' legs and the silent man with specks of reddish brown. Sweat turned the specks quickly to streaks, which ran down their bodies like tears. Harmonies rose in pure ecstatic emotion, and hands began to smear rivulets of mud over the arching and writhing bodies.

Between writing and slinging organic veggies at local farmers' markets, K.R.R. Bridgstreet teaches English Literature and Composition to unsuspecting college freshmen. Bridgstreet and her partner live in the woods in central New York with their cats and chickens. Visit krrbridgstreet.com for news on latest releases and upcoming books.