Launch Day for A Heart on Hold by Sara Barnard

Today is the launch day for Sara Barnard's A HEART ON HOLD! Sara is one of my fellow 5 Prince Publishing authors, so I'm excited to present her today! Please leave a comment with contact information (or email me directly) and you could win an Amazon Gift Card!

A HEART ON HOLD is a Civil War based Historical Romance.  This well written tale will move you! 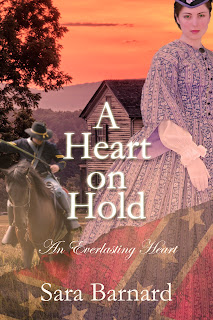 Charlotte’s lips only took a moment to find those belonging to her beloved.  He tasted faintly of molasses and she was immediately drawn into the warmth of his embrace.  Their bodies were perfectly pressed together, fitting as though one had been divinely made for the other, as Sanderson’s kisses trailed from Charlotte’s lips down her neck.
Her hands found his softly stubbled face and guided him back to her lips.  With his strong arms around her, she’d never felt more safe.  Or more vulnerable.

War.  Devotion.  Deceit.  Death.  How long can a heart hold on before it breaks?  Most women would carry on with their lives after being thrust into widowhood, but not Charlotte Adamsland.  Upon learning that her husband, Captain Sanderson Redding, was killed in a botched escape from a Confederate prison in Illinois, she clings to his promise to return to her no matter what, and quickly heads north through a war-ravaged country with only her faith in God and her beloved horse to bring her beloved Sanderson home – one way or another. 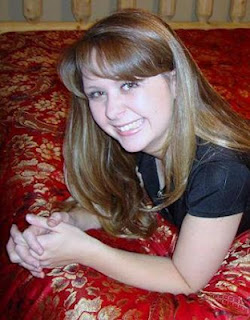 Sara Barnard is a military wife whose own heart has been on hold more often than not.  She holds her B.A. in History.  Her work has appeared in numerous anthologies, including REFRACTION (Marble Press, 2010), THE HARSH AND THE HEART: CELEBRATING THE MILITARY (Silver Boomer Books, 2011), CAMPFIRE TALES (Coolwell Press, 2012), and will appear in an upcoming Canadian anthology titled LIFESTYLES.  She is a member of Romance Writers of America and Abilene Writers Guild.
In addition to reading and writing, Sara loves helping her children with their homework, spending time outdoors with her family, and traveling.
Sara, her husband, and their four beautiful children live in the historic Oklahoma hills along with their three rescue dogs, two cats, two rescue kittens, eleven chickens, and one awesome horse.

Meet up with the Author
www.sarabarnardbooks.com is Sara’s website
sarathreesuns.blogspot.com is where she occasionally blogs about life as a Mommy of four and wife to a Drill Sergeant.
@TheSaraBarnard on Twitter
www.facebook.com/sara.barnard6 on Facebook
sarathreesuns@gmail.com is her email.

Where can I find this GREAT book?
(As always on Launch day we will update the links as they go live!)
Amazon
Barnes and Noble
Smashwords
iTunes

(To win the Amazon Gift Card you must comment on the blog post, supply your contact information either by posting it or emailing Bernadette at info at bernadettemarie.com.  This contest is run by and supported by 5 Prince Publishing.  The winner will be chosen at random)