Please tell us a little about yourself.
“Although I didn’t fully commit to making writing my life’s work until my sophomore year of college, I have always been a writer at heart. I was the only student in class to get excited about school papers, even asking to write a few for extra credit on occasion. I graduated from the University of North Carolina at Wilmington with a degree in Creative Writing – Fiction. After graduating, I moved to Japan where I wrote most of my debut novel, Airion: Return to Zire and all of my second novel Airion: Light and Dawn – the first two of a four book series. Japan was a peaceful place to just sit and write, but life in Japan was also filled with adventure. However much I loved it there, I had to return home to do what I love most. Write.”

Why do you think people should choose your books over another author?

The beauty of reading is that the reader doesn’t have to choose between books or authors. They just have to choose which book they’d like to read first. Haha. I would say that my book is very different than the mainstream novels selling right now. Along with the underwater setting and the introduction of strange creatures of the deep, there are two teenage twin male protagonists and, although there is a bit of romance in this piece, it is written more as a bonus to the piece than the driven force behind the work. It is a true Epic Fantasy.

After reading Airion: Return to Zire and Airion: Light and Dawn, when it comes out, I want people to take away a sense of courage and motivation to fight through their doubts and failures to have success in whatever it is they want to do in life. I want readers to be able to relate to Kobi’s feelings of betrayal and admire his selfless forgiveness while his world is crashing down around him. But most of all, I want my readers to closed my book after reading the last page feeling fully entertained and excited to read the next book. J

I used to be an English Teacher in Japan when I lived there for two and a half years. I taught English to Japanese Students of all ages from 2 to 65 years old. I created my own lessons and taught them with or without the help of the Japanese Head Teacher who maybe could or maybe couldn’t speak English. It was a great and rewarding job. The kids had a great time touching, pulling, and tying my dreadlocks in bows and hearts and anything else that would stay. Oh, I loved Japan.

The origin of the Airian people is pretty interesting. The Airians were land walkers but became submerged underwater during what they called “The Flood to Rule All Floods”. This flood covered the land and destroyed all of the people on Earth. Sound familiar? I thought it would be very interesting to link one of the most famously known events of the western world to the piece. It’s funny, I’ve only had a few people come to me and ask about the link. I guess it does provide a good reason why there is a society residing underwater.

1. I can read, write, and speak conversational Japanese.
2. I have been dancing since I was 6. I dance ballet, contemporary, jazz, and hip hop.
3. It took the same amount of time to write my first novel as it did to push myself to finally start my dreadlocks. 4 years.
4. I recently met, talked to, and shook hands with the English and Japanese voice actors of Goku from Dragon Ball Z. I am a very big dork. ^_^
5. I decided to try writing for a living because I had so many interests in life, I didn’t think I could ever settle on just one thing. With writing, I didn’t have to choose.

Thank you J.S.! And now here is a little about her book. 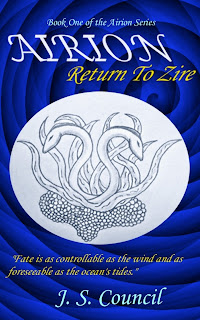 Aside from his outward appearance, Kobi is a normal thirteen-year-old boy. Living with his mother, his father, and his identical twin brother, Raili, with whom he spends most days at the cove watching dolphins and whales feed, he is happy with his life just the way it is. But his fourteenth birthday is coming and Kobi has no idea how much his life is about to change.

When Raili is pulled through a puddle in the floor of their second floor bedroom by a monster armed with poisonous, spiked tentacles, Kobi goes in after him. What he finds isn’t Raili, but a new world all together, buried beneath the ocean. With a bounty on his head that has been there since he and Raili’s birth, Kobi will have to learn to fight or die before he can be reunited with Raili again. Everything he knew to be true was a lie.

People he loved and trusted are not who they seem. He isn’t the normal boy he thought himself to be. A transformation is coming. Raili is gone. Blood is shed. Traitors lurk, waiting for their chance. War is inevitable. The fate of the world of Airion rests in his hands. The Wiseone speaks. Failure is certain.

Enjoy an excerpt from AIRON!

“If the Cellians just wanted us dead, why didn’t they just kill Raili instead of taking him?” asked Kobi.

“That is the question, isn’t it?” said Kaiyen slowly. “If they only wanted to use his power, wouldn’t they have taken them both?”

“Not necessarily,” said Rick, fist to his chin. “Having both would probably be too dangerous to risk. They may have been afraid of being destroyed from the inside if they worked together to free themselves. Even with one son of the prophecy, they could cause considerable damage, or so they may think.”

“But Raili would never do that though,” Kobi protested. “Dad…I…I mean, Black Master Rick. You know Raili; you know he wouldn’t do anything like that.”

“It may not be his choice,” said Kimi. “The Cellians can be very persuasive.”

Kobi’s heart sank. “What would they do to him?” he asked, not wanting to hear the answer.

“Whatever they had to,” said Kaiyen. “That is why we must focus on a plan of rescue, before Raili Saio acquires the powers they seek.”

“On our fourteenth birthday,” said Kobi.

“Yes,” said Kai Ventra. “Almost all Airians change on their fourteenth birthday. Along with the natural changes they undergo, such as growing gills, they also acquire unique individual skills, allowing them to thrive more than most others in that ability. These abilities can be anything from designing exceptional clothing to controlling the elements.”

“The stronger the ability, the harder it is to control,” said Kaiyen. “No doubt Cella is depending on this.”

“Agreed,” nodded Kaiyen. “But there is another matter that must be discussed, if I may.” Questioning eyes turned to Kaiyen. “Lady Sara,” Kaiyen continued after a swift nod from the King. He was addressing the old woman seated beside Kimi, “have you seen anything in your Kubec about a traitor in Zire.”

“What are you saying,” said the advisor to Bran’s left.

“This man possesses a tainted heart,” said the old woman, her eyes gazing into the diamond block. “His treachery dives deep.”

“Do you know who this man is?” asked Kaiyen.

“I see not his face nor his rank,” said Lady Sara, her brow creased and her hands resting on the Kubec. “However, he knows all that we know and some we do not.”

“It is as I thought,” said Kaiyen, “Zire’s traitor has resurfaced.”