Today my Spotlight is on author Jessica Dall. Jessica is a writer, editor, and reviewer, with such publishing credits as the novels, Grey Areas and The Bleeding Crowd, and several short stories that have appeared in both anthologies and literary magazines. She currently lives in Washington, DC where she works as a freelancer writer, editor, and creative writing teacher. Please welcome Jessica Dall

Are you a plotter or a pantser?
I am a die-hard pantster—I think everyone I’ve talked to about writing has at least once heard the phrase: “Well, I’m just writing until it makes sense.” Most of the time I start out with a general premise and some characters, and then start seeing where the characters take me when the world throws them for a loop. About halfway through I always seem to get to the point where I have to try to at least outline where the story needs to go—just to try to get my head around what’s happened. Whether or not I actually end up sticking to that outline, well that varies case to case.

Is there a message in your novel that you want readers to grasp?
People are always changing. I think that’s the overall theme you will find in all of my novels. Whether they want it or not, the world affects the people in it. The things we see, the people we know, they all change us—and that isn’t necessarily a bad thing.

How do your family and/or friends feel about your book or writing venture in general?
I have been really lucky in that my friends and family have really been nothing but supportive when it comes to my writing. My father I think has always been a little worried about how practical it is as a career, but other than that they are a wonderful support system and cheerleading team. My mother has always willing offered herself up as a beta reader for me (often times getting the first look at things I’m working on), and my husband has talked me through more than one crisis of confidence. I am so grateful to have all of them.

How do you come up with the titles?
Most of the time my “working titles” are just the name of one of the main characters. Looking at any half-completed manuscripts on my computer you’re likely to just see a list of things titled “Mary” or “David”. Sometimes I’m lucky and have a line that inspires me and the title will come halfway through. If I’m not, that’s when have to go looking. Sometimes I’ll look for quotes or sayings that I can jerry-rig into a title, or I’ll look something important in the story to name it after (a character, theme, or place). And if all else fails, I go to the NaNoWriMo Forums (an online writing community I’m very involved with). One of the forums on the site is an “adoption” thread where people leave names, titles, even plots they’ve come up with and don’t want to use for people to use. Scrolling through there, I’m almost always at least able to gain inspiration to tweak into my own title.

Do you work on one project at a time? Or do you multi-task?
I think one of my biggest writing problems starting out was writing attention deficit. You quickly find out when you write that coming up with ideas are the easy part. About halfway through the shiny new idea seems like so much more fun to write about than the one you’re currently slugging through. Since I would (probably) never get anything finished if I gave in to that, I try to force myself to finish one project before getting involved with another. I have a bunch of notes with stories I can start on once I’m done with the current work in progress, but I do my best not to actually write both at once.

Please tell us 5 miscellaneous facts about yourself.
-        I wrote my first novel when I was fifteen about sixteen-year-old characters. Ten years later, my characters still tend to be teenagers.
-        I got my degree in political science, originally intending to go to law school.
-        I love watching bad movies—particularly low-budget ones.
-        I once worked at the San Diego Zoo.
-        If I could spend a year living abroad, I would love to spend it in Orvieto (Italy)

Please share with us your future projects and upcoming releases.
Though there are no upcoming releases as of yet, I am currently finishing up a young adult fantasy trilogy. Excerpts should be going up on my blog at some point in the near future. 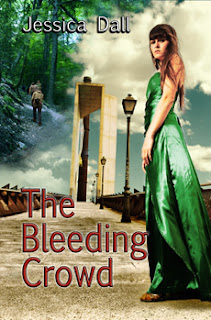 The Bleeding Crowd: At 20, Dahlia has never seen a man, let alone talked to one. And why should she want to? Society has been rid of them for hundreds of years and things have never been better. When she meets Ben, however, it seems more and more like the society she knows has been based on a lie. Pulled into rebellion brewing not far under the surface, Dahlia is forced to rethink everything she ever thought she knew, as her world turns more dangerous that she ever thought it could be.
Posted by Bernadette Marie at 12:00 AM