Release Day for Finding Hope, book 3 in the Matchmaker Series

This is a day for celebration! After nearly three years of waiting for this book to be released, it is finally in the hands of my publishing company and the trilogy in now completely released! For those of you who have waited all these years, thank you. Your undying faith that Hope would eventually be read helped me through some very rough times.  I am so please to finally introduce the world to Hope Kendal! 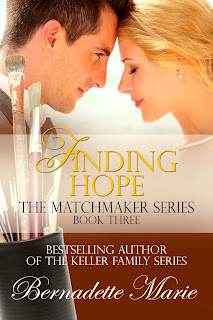 Hope Kendal has lived a perfect and peaceful life. However, she is a mystery, to herself. The one thing that would make her feel whole would be to know about her birth parents and discover who she really is.

Private investigator Trevor Jacobs has a job to do—find Hope for her biological father and get to know her without her finding out. Locating her was the easy part. Falling in love with her hadn’t been in his job description.

When Trevor is asked by Hope to help her find her birth parents he is put into a difficult situation. If she discovers he already has all of her answers it might cost him his heart—and those answers might cost Hope her life.

He’d seen it all in his chosen profession. The most popular: the cheating husband. There were bosses who suspected employees were skimming the till. And like the angry wives’, the bosses’ suspicions were usually correct. A missing relative or child was just as common, but this case piqued his interest more than most.

Trevor Jacobs looked down at the manila folder on the passenger seat of his car. He tugged at his collar.

The Missouri summer was warming the inside of his car to temperatures that he was sure would kill a man. He picked up the folder and flipped it open.

Finding Mandy Marlow had been a challenge because she’d disappeared when she was seventeen. That had been forty years ago.

The last time her mother had seen her, Mandy’d had a newborn infant in her arms and had come back begging for money. Ruth Marlow, Mandy’s mother, had given him the case’s scant details over the phone. His notes clearly reflected that Mandy hadn’t gone asking for a place to stay or for help with the baby. She had wanted ten thousand dollars and they had refused. She had told them she’d be living with friends. Friends who would love her and her baby, unlike her parents.

He’d finally tied Mandy to a David Kendal, a retired airline pilot living in Kansas City, Missouri.
Mandy Marlow had lived in the Kansas City area approximately seven years after she had left her parents’ house. Her DMV records showed she’d lived in a house owned by David Kendal and exactly seventeen years after she’d last been seen by her family she changed her name to Mandy Kendal. He’d searched marriage records, but he found no record that Mandy and David had actually been married. She had assumed the name through proper channels. However, their names did appear together on the birth certificates of Carissa Marlow Kendal and one Hope Katherine Kendal.

Hope Kendal had been born by cesarean moments after they had pronounced Mandy Kendal dead. She had died of heart failure and had papers that had strictly instructed that she not be revived.

David Kendal married a Sophia Burkhalter only three weeks later. He flipped through the notes. “In a lovely back yard ceremony of the home of the bride’s grandmother Katherine Burkhalter,” the newspaper clipping had stated. Adoption records showed that Sophia, now Kendal, had adopted Carissa, then seventeen, and the newborn Hope only three months after she’d been born.

What a tidy package, he thought. Ex-lover of the dead woman shares custody of his children with his new wife. What a twisted novel plot that would make. He laughed. However, armed with the facts he had, he knew it had been that simple.

A change of heart, or perhaps a shove in that direction, had Mandy Marlow—Mandy Kendal—giving up her children and refusing to fight for her own life.

Sweat beaded on his brow. Trevor reached for his bottle of water. It had grown warm. He drank it down and tossed it into the backseat with the other bottles he’d discarded there. He knew he wasn’t the ideal patron for a car rental company.
He flipped through his notes again and stared into the face he’d become familiar with.
Hope Katherine Kendal.
She stood in a crowded room, but the camera had zoomed in on her. She’d been intrigued by something, or someone. Long blonde hair cascaded behind her shoulders and crystal blue eyes watched him from the photo. She had lips that were full and just a bit pouty. The face that mesmerized from the photo had a cherubic look to her, but a super model’s features.

He knew he’d been fascinated by it too long, too many times. He’d seen it in his dreams. He’d found himself driving down the road thinking about her face.

Trevor checked his watch. He’d been sitting in the cemetery, in his parked car, for over two hours. He’d wait another two hours and then he’d move on.

But he didn’t have to wait any longer.

A blue Miata pulled up between him and the headstone that read Mandy Marlow Kendal. The beautiful blonde that he’d familiarized himself with stood there in person. He felt his heart race a little faster.

The pace of his heart was different from when he was about to confront most of those whom he’d followed. That was adrenaline. This was lust.

Hope stood just outside her car. She was dressed in jeans that rode low on curvy hips. She wore her tie-dyed shirt tucked in, giving her a look of being taller than she was. Her hair fell well down her back in a long tail.

Large sunglasses shielded her eyes, but he knew how blue they were.

She wasn’t moving. He was far enough from her he knew she couldn’t see him, but he wondered what she was thinking when she stood still on the narrow dirt road. She reached through the open window of her car and pulled out a bouquet of flowers.

Another car pulled up behind her. Trevor watched with intrigue. Carissa Kendal Samuel—he’d familiarized himself with her face as well—climbed out of her car and approached Hope.

He watched them exchange a few words and then an embrace. It was amazing how different sisters could be. Hope was fair. Her blonde hair was strikingly different from the dark hair of her sister. Carissa stood a few inches taller than Hope and her figure was straighter where Hope’s was voluptuous.

Arm in arm the sisters walked toward the grave of their birth mother. A smile crossed Trevor’s lips. Right on time.

I hope that you have followed up with the Kendal women in the other Matchmaker books. If not, please look them up. Book One, Matchmakers. Book Two, Encore. I'm sure if you like happily ever after as much as I do, you'll enjoy the stories!  Thank you for reading!
Bernadette Marie

Posted by Bernadette Marie at 10:59 PM