The Library
By
Carmen DeSousa 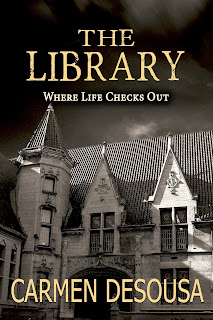 The Library
When Mark Waters decided to be a detective, he didn't plan to investigate ghosts.

But as he sifts through evidence of a supposed suicide by train, he learns a murder that took place eighty years ago may directly affect his case.

Six months after the strange occurrences at The Depot, there’s another murder. This time, The Library holds secrets of several murders, and the dead won’t rest until the murderer checks out too. 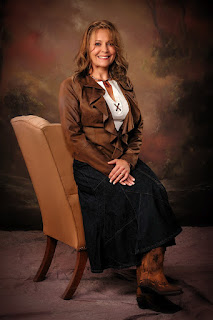 About Carmen DeSousa
A romantic-suspense writer, Carmen writes novels that overflow with romance, mystery, suspense, a hint of paranormal sometimes, and of course--tragedy. After all, what would a great story be without a heartrending event setting the stage? Her sensual and gripping stories have earned bestseller status on three continents because of her ability to make readers love, laugh, cry, gasp, and hope.

Excerpt of The Library
Wade inserted the key into the deadbolt the same time he did every night. Only this time, the door glided open as though some unseen force had invited him inside. The house was quiet. Too quiet. Usually he’d hear the sound of the TV, a kitchen timer alerting that dinner was ready, or the constant boom from the stereo upstairs. But this evening, tomblike silence greeted him.
She’d threatened to leave; he just hadn’t believed her. After all, she’d been grumbling that same nonsense for twenty-two years. A romantic getaway for two would straighten her out.
Their only child was going off to grad school in a few weeks. So for the first time in their marriage, they’d be childless. His life had changed the night she told him she was pregnant two weeks away from high school graduation, but it hadn’t stopped him from working his butt off to accomplish his dreams. Yeah, he had to work two jobs, go to night school, and function without sleep, but they’d made it. They had a beautiful house in Edenbury, Pennsylvania, two stylish vehicles in the driveway, and their daughter was heading off to Harvard.
And as soon as he finalized the contract he’d been working on for the last year, Wade could take Vanessa on as many getaways as she wanted. He’d cashed the first check on his way home. Just the first installment was more than they’d made their first ten years of marriage. That’d get her eyes twinkling again.
Burnt meatloaf singed his nostrils as he ventured into the kitchen in search of his wife. She killed their dinner again. His wife would get so busy typing she’d forget everything around her.
He turned off the oven, but left the charcoaled mess inside. Last thing he needed was the new smoke detector he’d installed to go off, once again alerting the neighbors how often his wife nearly burned down their house.
Wade emptied his pockets of his money clip, keys, and receipts onto the credenza by the stairway, as his wife had always requested, then started upstairs. “Vanessa honey,” he called as he trudged up the wooden steps, knowing she wouldn’t hear him, but he tried anyway. He gripped onto the banister, pulling himself forward. He was too tired to climb stairs before eating. But since she always wore her headphones when she worked, she wouldn’t hear if he screamed at the top of his range.
Tugging at his tie, he pushed open their bedroom door. Maybe they could have a quick romp before dinner, get a taste of what it’ll be like to be empty nesters.
Not believing his eyes, he launched headfirst toward his wife. “No!” he screamed.
Out of his peripherals, he saw the long black rod, but it was too late to react. The light extinguished the moment the object made contact with his skull, leaving him in a pit of blackness, a nightmare he’d never escape.

Posted by Bernadette Marie at 2:38 PM